fail of the lip-sync win

win of the lip-sync fail 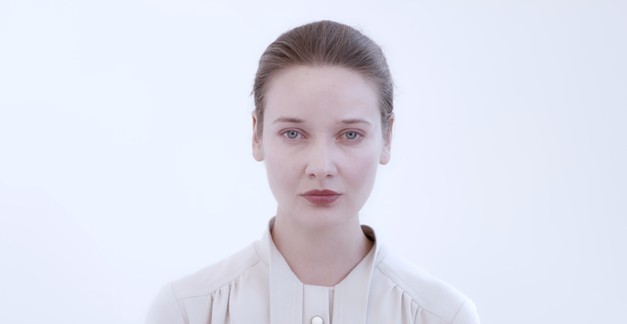 Matching sound to movement evokes certain kind of ambiguity. In the process of recording audio-video representation of singing performance, image and sound are split and recorded separately, one after another. The stubborn rigour of the first one in the sequence of the recordings, may it be sound or image, orders obedience from the one that follows. Video recording of singing becomes documentary or fiction, depending on the soundtrack that it’s paired with. It becomes documentary as the person we see on the screen tries to enact the movements that neither the spectator nor the character in the video may see, only hear. It becomes fiction when a false movement of a lip or too hastily pronounced consonant reveal the fake. What is being sung is not the singing that we hear.

Fail of the lip-sync win is a video showing the singer while lip-syncing a song titled Silence by Isaak Dunayevsky and Mikhail Matusovsky. Due to lack of recording of the song, clicktrack functions as an audioguide to the lip-syncing process. Slight differences and discrepancies occur as singer fails to match her movements to the cues of an audioguide.

Win of the lip-sync fail is a performance that puts the video of lip-syncing in the position of move-score for singing the song anew. Silent video receives a live-soundtrack based on the moves of a muted body. Sound that has never been known for how it sounds but only for how it looks becomes the lip-syncing win. Resynchronisation goes backwards.